Celia and Ronnie had lots of inquisitive people visit the special Sunday Market Stall.  Once again the Warrigal  Greens Pesto was featured as a local foraged treat for visitors to sample.  The  Kiama Market  supported SMH Good Food Month  as a special regional event. 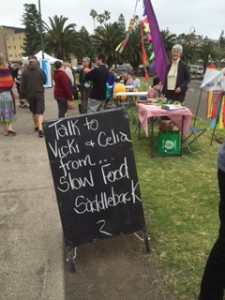 Celia and Vicki had a stand at the Kiama Farmers Market on Wednesday.  It was very successful and lots of people questioned what Slow Food Saddleback is about?  We enticed locals with a small sample of a Warrigal Greens (NZ Spinach or Cook’s Cabbage) 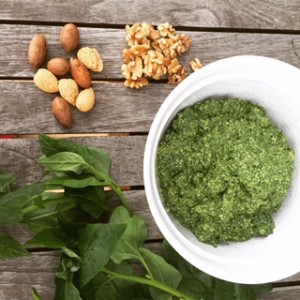 Take 1 prepared cupful of Warrigal Greens (prewashed, dipped in boiling water for 1 minute and quickly cooled in a bowl of iced water then drained/squeezed well) It’s very important to cook it first!

1 generous cup of any garden herbs (washed and drained) I used garlic chives, coriander, parsley and rocket.  Basil would be nice too.

1/4 to 1/2 cup olive oil, 1 cup of walnuts (any nuts ok), a pinch of salt and or sugar to your taste and juice of lemon.  Capers are a very nice addition too. Parmesan is another alternative.

I serve it on pasta, toast, potatoes or a cracker. Delicious!

Gerringong Public School will share in $35,000 for sustainability projects thanks to the Jemena Junior Landcare Sustainability Grants. The idea behind funding was to support schools and youth groups projects in making a positive difference to the environment and educating young people about energy safety and efficiency.  The school had to put forward a creative proposal of how they would use the money under the theme of living, growing and exploring sustainability. The Garden Grubs are purchasing a native bee hive for their garden. 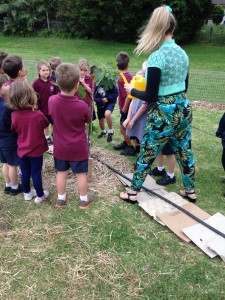 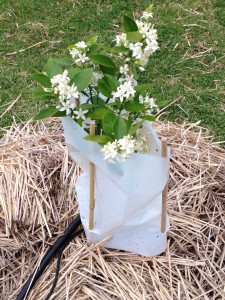 Penny Rushby-Smith designed this garden. She and her father Leon Sadubin have an exhibition ‘From the Tidal Zone’ featuring Penny’s artwork alongside furniture made by her father.  Check out the exhibition 31st October to 8th November, 10am-4pm at unit 7/11 Bergin Street, Gerringong . 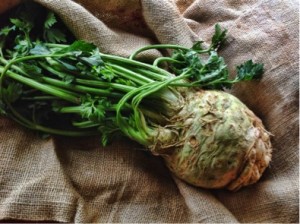 Celeriac is related to the celery and parsley family though it is much bigger. It looks like a root but it is a corm or enlarged stem with brown warty skin, white flesh and a pungent flavour. It has long been used in French and Middle Eastern cuisines but is not widely widely used here.

Cut celeriac goes brown quickly so add pieces to acidulated water as they are prepared. Thickly peel off all the warty skin and cut into suitable sized pieces and place in the water.

Thick slices can be baked, roasted or made into chips.

A delicious salad can be prepared by cutting into thin julienne slices, then tossing with a dressing and some creme fraiche and parsely. Similarly it can be shredded into mayonnaise and parsley added to give a delicious dip.

Celeriac makes a delicious puree to serve with pork or chicken. Cut into slices and cook in butter until soft. Add cream and simmer gently till cooked, Puree the mix. You may like to add some truffle oil or shave truffle to serve. 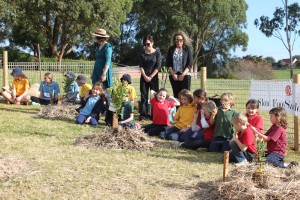 “What’s a Panama Berry?”Where do we plant it?’ ‘How big does it get?’What does it taste like?’ Such were the questions we heard as we visited Gerringong Public School on 24th July, National Tree Day.

The Food Orchard was the brain-child of parent Penny Rushby-Smith and Slow Food Saddleback, with the aim to encourage students to find out where their food comes from, how it grows and to experience growing and nurturing their food, ideals in keeping with Slow Food’s ideals of educating people in using good, clean, sustainably and ethically produced food. The site chosen was on a north facing slope at the back of the school. Penny and a team of enthusiastic parents, had previously held a working bee, following her carefully managed plans, to weed and dig holes and prepare for the planting with manure and mulch as well as constructing a partial fence to protect from wayward playground balls.

Each class is to care for a particular plant so on National Tree Day, throughout the day, classes came to the orchard to plant their tree which was then labelled with tree name and class name. In the afternoon, representatives from each class and members from Slow Food Saddleback, who had purchased the plants, joined the headmistress as she declared the orchard open, followed by afternoon tea.

Slow Food Saddleback members hope that this will be a sustainable project and appreciate the opportunity to work with children in our community.

We were joined at the conference by Tricia Ashelford from Kiama Farmers Market and in the future we are keen to participate in some market activities to further expose the Slow Food message of Good, Clean and Fair Food to the Kiama community.

Poulo Di Groce, General Secretary of Slow Food International based in Bra, Italy opened the meeting after Noel Butler, the traditional custodian led the welcome to country. As part of his global update, Paolo was delighted to tell us that Slow Food has established it’s first convivia in China, he considers this a major breakthrough.

‘Changing the Food System’ was this years theme. New event ideas shared by the various groups highlighted interesting ways to support this theme. Each Convivium presented a summary of their year’s activities, and we were all quick and keen to learn from each other.

Alison Lansley, from the Australian Specialist Cheese Makers Association  and Kris Lloyd, head cheesemaker at Woodside Cheese Wrights in South Australia discussed the development of Raw Milk Cheese Production in Australia. A long battle has been waged and restrictions have been eased but producers are still facing severe conditions and rules.

The second session What is Slow Fish? How does Slow Food approach this topic? Chef and food critic Matthew Evans, Pia Winberg founder of Venus Shell Systems (Pia is speaking at our SILOS lunch) and David Maidment, local grower of the Arc of Taste’s Angasi Oyster, spoke of the problems we are facing in Australia with sustainability and food labelling issues, particularly in restaurants. The rejection of the  Fish Imports Disclosure  Bill was  also discussed.                                                                    Note (see article SMH AUG 29-30, 2015 by Nicole Hasham) Fish Imports Disclosure Bill rejected. Consumers in Dark on Seafood origins. Independent Senator Nick Xenophon introduced the Bill after a Senate inquiry recommended the measure for cooked or pre-prepared seafood.  Proponents said it would have enabled diners to support the Australian seafood industry and know their meal was clean, sustainable and legal. Seafood consumption has doubled since 1975 and about 75% is imported. Australian Medical experts have expressed concerns over the amount of Asian imports containing banned antibiotics.

A Slow Fish dinner was enjoyed that night at Bannisters Restaurant at Mollymook promoting local seafood including the Angasi Oyster.

On Saturday the talk was based around the 3 international objectives 2012 -2016 *10,000 Gardens in Africa, *10,000 Arc of Taste Products,*10,000 Slow Food Convivia and Terra Madre food communities. Several groups provided their regional  specialty foods, together with Arc of Taste products for sampling.

That evening we were treated to a most memorable dinner at Cupitt’s Winery, Milton.  Several long tables treated 120 members to a Slow Meat – Nose to Tail Dinner featuring their own beef, wine and produce. It was superb!!! and thank you Rosie, Grif and Family.

Sunday bought much excitement when Poalo announced the sponsorship of Noel Butler, the Traditional Custodian and Budawang man of the Yuin Nation to attend the 2015 Indigenous Terra Madre event in Meghalaya, North East India in November this year.

A demonstration of a new App featuring Sydney that Slow Food  has been working on, highlights restaurants, cafes, markets that align with Slow Food guidelines. This will be available to members in the near future and will be an international city user guide eventually.

We look forward to 2016 Slow Food Conference which will be held in Mildura at a date to be confirmed.  This convivium has a great source of interesting cultural produce including the Murray Cod that was accepted on the Arc of Taste this year. They also have a tradition of food production in conjunction with the Italian community that features so strongly in the area.

We will post the dates for the Mildura events as soon as they are confirmed.